Some exciting plans are in the works when it comes to parks in New Albany, including upgrades to neighborhood parks and a brand-new park space at the Taylor Farm site.

It first became apparent in 2019 that upgrading the City of New Albany’s park network was important to the community. City staff received many park-related comments from residents while conducting outreach for Engage New Albany, the City’s five-year strategic plan. That feedback highlighted the need for New Albany’s existing public parks to be examined and studied for potential improvements. Throughout 2020, staff worked with residents and community groups, such as the New Albany Joint Parks District, to create a Parks Framework Plan. 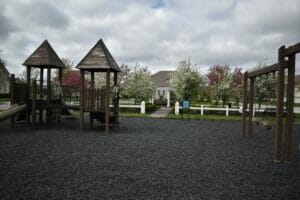 The Parks Framework Plan includes an assessment of the City’s current parks and equipment, analysis of the accessibility of the City’s parks and trail network, and recommendations for improvements for each neighborhood park. The recommended improvements include updated playground equipment, building accessible features so people of all abilities can use the playgrounds, and amenities such as seating and landscaping.

The City expects to begin upgrading the parks in 2021 with a goal to improve two to three parks per year until all of the neighborhood parks are updated. The number of parks updated annually may fluctuate depending on overall budget and the costs necessary to upgrade each park.

Certainly, the impact of the COVID pandemic on the local economy is something staff members are actively monitoring as it could impact the City’s ability to upgrade the parks within this timeframe. However, City Council has prioritized these efforts as they recognize how important these spaces are to residents and their overall quality of life.

You can view the September 2020 version of the Parks Framework Plan below. A revised and final version will be completed in Spring 2021. 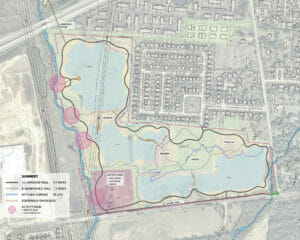 While, there is a lot to look forward with the neighborhood parks, the City of New Albany is also currently working on designs for a larger community park in Taylor Farm Park.

The Taylor Farm site is a nearly 100-acre tract of land bounded by the Rocky Fork Creek, Dublin-Granville Road, Harlem Road and the State Route 161. It has significant historic but also ecologic value to the community. It has been a farm dating back into the 1800s. 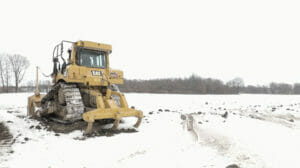 City Council approved funding in early January 2021 for design work and improvements. The first phase of the project will include 3.5 miles of multi-purpose trails, seating areas, landscaping and parking.

It is a very scenic piece of ground and is big enough that it will feel like a Metro Park with woodland areas, open areas and wetlands.

The City of New Albany believes Taylor Farm Park will be a destination park for the entire community. It is also going to be very close to Rose Run Park and the Village Center, creating even more recreational opportunities for the community.

The first phase is scheduled to be completed by the end of 2021. City staff members have not yet determined how many phases there will be in the project overall. Taylor Farm Park will be a work in progress, with new facilities being added as capital funds allow.

Thanks to everyone at @animalsrspecial for doing o

Meet Luna! She is our office manager and real boss

Kudos, Courtney!On this #FoodPantryFriday, we are shining a spotlight on our Social Work Intern, Courtney Roberts. Courtney is a student at The Ohio State University College of Social Work . The primary focus of Courtney's internship is to assist with community outreach in addition to volunteering inside the pantry. Our relationship with community partners, in particular with the NAPLS district, is critical for us to connect students who may be facing food insecurity with the resources they need. The OSU College of Social Work "...consists of students and faculty who build stronger communities, celebrate difference, and promote social and economic justice." "EMBRACE DIFFERENCE. SEEK JUSTICE. BE THE CHANGE." Working with an intern from OSU-CSW made perfect sense for NAFP. With this internship, the NAFP is able to not only establish a relationship with OSU-CSW students but also strengthen our connection to NAPLS. Courtney shared, “While serving as an Ohio State College of Social Work Intern, I have been offered a wonderful opportunity of working with a high spirit, talented team. As I have a great passion of helping others in need, I have valued every moment working alongside the staff and volunteers. While in this environment, it has been top priority to be sure to provide all clients with an abundance of resources and quality service. The New Albany Food Pantry serves a great purpose in the community and I am proud to be apart of such an impactful organization.”Courtney has been an amazing source of ideas and inspiration as we work to improve our outreach efforts.Thank you, Courtney!...#socialworkersofinstagram #findthehelpers #advocacy #foodheroes The Ohio State University ... See MoreSee Less

The Ohio Department of Public Safety has received reports of a possible scam being perpetrated on Ohioans from scammers claiming to be from Ohio Homeland Security (OHS). Ohio residents have reported receiving phone calls from scammers claiming to be from OHS and informing the call recipients that their identity had been stolen. Caller ID on these calls indicate the calls originated from the OHS main line 614-387-6171, but they did not; the Ohio Homeland Security main line was spoofed. Spoofing is when a caller deliberately falsifies the information transmitted to your caller ID display to disguise their identity.Click the link below for information on how to protect yourself from telephone scams. ... See MoreSee Less

The Ohio Department of Public Safety has received reports of a possible scam being perpetrated on Ohioans today from scammers claiming to be from Ohio Homeland Security (OHS).
View on Facebook
· Share

The City of New Albany works hard for its residents, businesses and visitors. In this video, Economic Development Specialist Jackie Russell talks about her role in business attraction and retention in New Albany and why she loves her job serving our community.You can learn more about a career with the City of New Albany by heading to NewAlbanyOhio.org/careers. ... See MoreSee Less