New Albany has put the right elements together to foster long-term sustainable growth by proactively planning for and managing commercial development in a way that strengthens the community’s tax base and increases revenue for the city and our schools while protecting the desirable quality of life residents enjoy.

Since 1998, New Albany has attracted more than $3 billion in private investment resulting in more than 11 million square feet of development, 15,000 jobs and more than $100 million in income tax revenue. Today, income taxes, much of which are derived from our business park, account for more than 80% of the New Albany’s annual general fund budget. Commercial development has also generated more than three times the amount of property tax revenue than our schools would have received if the land in the park had remained undeveloped. 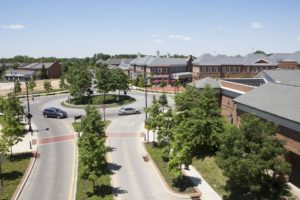 As a master-planned community, New Albany’s approach to sustainable development attracts a diverse mix of new business investment while encouraging retention and expansion.

The largest master planned business park in the region, the New Albany International Business Park enables the city to achieve robust growth while avoiding the pitfalls of typical suburban sprawl. The master plan is continually updated with input from residents, businesses and other community stakeholders. 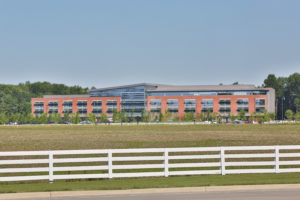 By aggressively leveraging public-private partnerships to promote business investment, New Albany has saved millions of dollars. For example, an agreement with American Electric Power (AEP), when the company located its mission critical transmission center here, allowed the city to lease the company’s advanced fiber optic network instead of building its own.

Utilizing AEP’s network saved the community $7.5 million and created a strong competitive advantage. The robust, carrier neutral fiber infrastructure was among the primary reasons that Nationwide Insurance and TJX Companies selected New Albany for their mission-critical facilities after nationwide searches. 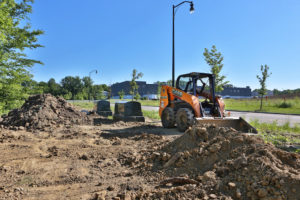 Location planning decisions are made easier for businesses thanks to New Albany’s technology- and shovel-ready commercial sites that meet the latest site selection criteria, enable businesses to efficiently expedite relocation and expansion decisions, minimize business disruption and maximize their return on investment. 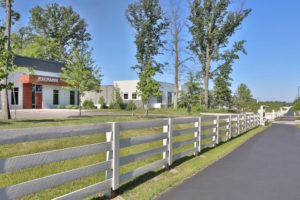 Used throughout the nation, temporary economic incentives are an investment in the city’s future and put New Albany on an equal playing field when competing for business. Each incentive is carefully evaluated to ensure a strong return on investment for the city and schools.

The criteria for each incentive is based on a formula that calculates revenue generation per square footage of commercial development for each type of industry cluster. The formula was developed through a public process that established benchmarks and metrics prior to the business park opening in 1998. The benchmarks and metrics are periodically reviewed with public input.

How It Benefits Our Community

Thank you to everyone who supported today’s toy

Tomorrow is the big day! Drop by the Village Hall

Tomorrow is the final day to take advantage of our

We're excited to see our partners at MKSK recognized at the 2022 Ohio Chapter ASLA Annual Meeting & Awards Gala with an Award of Excellence for their work with our Rose Run Park Phase 1 project! Rose Run Park physically connects people to nature, each other and all of our area community assets while preserving green space in the heart of New Albany between Market Square and the school learning campus. You can learn more about the park here: newalbanyohio.org/rose-run-park#NewAlbanyOhio ... See MoreSee Less

The Byington Park improvements are now complete! Work included updated playground equipment, building accessible features so people of all abilities can use the playgrounds and amenities such as seating and landscaping. The work is part of the City of New Albany's commitment to improving all city-owned neighborhood parks. Learn more: bit.ly/3uqMgTO ... See MoreSee Less

New Albany City Council is scheduled to meet on Tuesday, December 6 at 6:30 p.m. The public can stream City Council and Boards & Commission meetings online; however, the public will need to attend meetings in person in order to participate. More info: bit.ly/3xi4c50 ... See MoreSee Less

Thank you to everyone who supported today’s toy drive! New Albany student Gwen Mouat and NAPD teamed up to collect more than 700 gifts for the Toys for Tots campaign! 🎁🎄❤️#newalbanyohio ... See MoreSee Less

A New Albany teen is partnering with New Albany Police to collect gifts for kids in need🎄❤️ 👉Today, December 3, 2022, from 11 a.m. - 1 p.m.👉Village Hall Parking Lot (99 W. Main St.)16-year-old Gwen Mouat was born with a condition called propionic academia. Her "wish" is to brighten the holidays for others with a toy drive. We hope you'll consider helping Gwen and NAPD as they help others! #NewAlbanyOhio ... See MoreSee Less