Chief Hoovler has served Plain Township as Fire Chief for over 25 years. During his tenure the community and department have both grown from a small, semi-rural department to one capable of providing service to the more than 10,000 residents and a daytime population of over 20,000. On behalf of the whole community, the Trustees would like to thank Chief Hoovler for his dedicated service and wish him the best in his Retirement.

Chief Rupp joined Plain Township as Assistant Chief in January of 2002. Before that, he worked for the Madison Township Fire Department for 29 years, retiring as a shift commander in 2000. During that time, Chief Rupp also had 20 years of experience as a flight medic. He is a well-respected fire chief and recognized nationally for his knowledge and experience.

Chief Rupp has led a number of programs and initiatives at Plain Township over the past 18 years and will continue efforts with community stakeholders to make New Albany and Plain Township a safe place to live, work and learn.

The township posted the fire chief opening in March and received applications from 10 qualified candidates. Initial interviews were held which included 3 internal candidates and 2 from other organizations. Three finalists were interviewed including two internal candidates and one external. Ultimately, the Trustees felt that Assistant Chief Rupp’s blend of skills and community knowledge would best serve the Plain Township Fire Department and the community as its next leader. 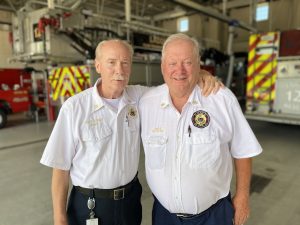 No two days as one of our maintenance workers are ever the same. You get to do it all in this position - maintaining our fire hydrants, repairing pavement, operating specialized equipment, mowing and more! If you're interested in learning more about becoming a maintenance worker with us, click here: NewAlbanyOhio.org/careers ... See MoreSee Less

The City of New Albany works hard for its residents, businesses and visitors. In this video, Dispatcher Anita Mercer describes the work she and her fellow dispatchers do to help keep New Albany Police Officers and residents safe!

We currently have an opening for a dispatcher. Please share this link with someone who might be interested in joining the team! NewAlbanyOhio.org/careers ... See MoreSee Less

The August 4 New Albany City Council meeting has been canceled. The next meeting will be Tuesday, August 18, 2020. New Albany residents interested in attending any public meetings of our City Council or Boards and Commissions can attend these meetings online to help us maintain a safe environment. For a schedule and directions for logging in, please visit bit.ly/NAMeetings. ... See MoreSee Less