Notable: Elected to council in New Albany in 1921. Took office in January 1922 and was elected president of council by her colleagues. She became first female mayor of New Albany when Mayor J.F. Margarum resigned on May 31, 1922.

Martha’s grandparents, Anthony Wayne Taylor (1797-1883) and Melinda Trumbo Taylor (1801-1874), met in Hardy County, Virginia (later West Virginia) and married there. They came to Ohio on horseback and arrived on April 8,1822. Anthony Wayne Taylor was 25 years old and Melinda was 21. During much of the trip, there were no roads and they had to cut their way through the forest to arrive at their destination. It would not have been passable by wagon in most areas.  Hardy County is about 325 miles from New Albany (“as the crow flies”) and is located in the West Virginia panhandle.

Melinda Trumbo Taylor and her husband had only one child at the time, A.P. (“Pike”) Taylor, and he turned 1 year old on the day they arrived in Plain Township. He “was carried all the way from the headwaters of the Potomac River in her lap on horseback” according to a Columbus Gazette newspaper article written by Pike 50 years after the fact.

Anthony Wayne’s father and most of Anthony Wayne’s siblings also left Hardy County at about the same time. They settled in Cincinnati for a few years, and some of them moved further west as more of the country opened up. Why didn’t Anthony Wayne settle with the other family members in Cincinnati? It could be because the Trumbo family (his wife’s family) was purchasing land in Plain Township, Franklin County, Ohio.

Anthony Wayne and Melinda arrived in Plain Township in 1822. They purchased 600 acres of land, which they eventually expanded to 1,000 acres. They went on to have a total of six children. Further research may indicate Anthony Wayne Taylor received warrants to purchase some of the acres from his father who was a soldier in the Revolutionary War and would have been entitled to warrants as compensation for his service.

Anthony Wayne and Melinda Trumbo Taylor built a log cabin on a path that is now called Dublin-Granville Road. This path (at least the section between Hamilton Road and New Albany) was most likely improved by Anthony Wayne himself, as it was later named “Anthony Wayne Taylor Pike.” His cabin was built on a small hill along the road that existed until about 2019 when a roundabout was built to service a nearby Hobby Lobby and Target store. A map at the Ohio History Connection indicates this “hill” may have been a Native American burial mound.

Later, as his children grew up, Anthony Wayne built two more cabins in this area. Pike lived for at least some of his married life in one of those cabins, as did Lorenzo. They eventually built their own houses on the 1,000-acre farm. Pike’s house was around the corner on the west side of Harlem Road, in the area where Addenbrook Blvd. intersects Harlem Rd. This land later became known as the West Harlem or “Harlem Square” subdivision when it was developed by MI Homes/Schottenstein in 1997. Lorenzo built the large brick vernacular house with the mansard roof, still existing near the Rocky Fork Creek, just east of Target and Hobby Lobby.

[Note: According to Arloia Baughman Walton, one of Anthony Wayne’s three cabins was later purchased by Mary Baughman, who moved it to the northeast corner of Morse Road and Johnstown Road. Bill Resch, who later owned that same parcel of land, indicated there were two log cabins on that property when his family lived there in the mid 1900s. One may have been the “original Baughman cabin” that has been written about by numerous historians, and the other was most likely the Taylor cabin. Bill Resch later donated the Taylor cabin to the New Albany Plain Township Historical Society in the 1980s.]

Martha’s schooling included music classes at Central College and attendance at Normal School in Reynoldsburg. At the age of 16 she began teaching at the local school near her parents’ home. It was believed to be on the north side of Dublin-Granville Road, where Harlem takes the jog.

In 1885, Martha married Edward Calvin Babbitt (1858-1934), who was born and lived most of his life on the 100-acre Babbitt farm which the family had purchased in 1846. The Babbitt land was on Dublin-Granville Road, east of New Albany, just past the Columbus Jewish Day School on the opposite side of the road.

After their marriage, Martha and Edward lived for some time in New Albany’s historic village center. While living there, they were very involved in their community. Martha was active in the New Albany Methodist Church, where she taught in the Sunday school classes. Her husband served as a council member. Martha was also active in the Ladies’ Aid (an organization which raised money for the poor or disadvantaged) and helped with all of their fundraisers. Edward was also a farmer and worked on the family farm owned by his parents on Dublin-Granville Road. 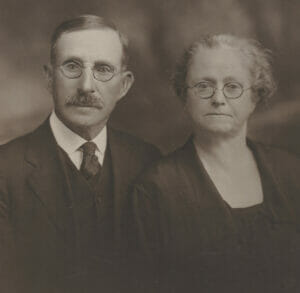 After many years of discussion and hard work, women finally received the right to vote in 1920 when the 19thamendment to the Constitution was adopted.

Council members, mayors and other local office holders were elected every two years in those days, and the local election was scheduled for November of 1921. Unfortunately, someone forgot to have the ballots printed for the election or lost them, so all the candidates had to be elected by “write-in” ballots. There were only 200 residents of New Albany at that time and most of them knew each other well, preventing a complete disaster of the election. The village was only about 6 blocks in size. The town was surrounded by local farms which were mostly outside the corporate limits of the village.

When the election results came in, five women and one man were elected council members.  J.F. Margarum was elected Mayor after running unopposed. The council members and mayor were sworn into office on January 2, 1922 by Mayor B.P. Ranney.  Martha Babbitt was elected president of council by her peers.

At the new council’s second meeting, council members voted to replace the carbide gas street lights with electric lights. They also voted to “tar and chip” the roadways in the village center. The automobile had been introduced to New Albany about 10 years earlier, and this created the need to improve roadways and build bridges for auto traffic. Records show that the council members also wanted to “improve sewer systems”. They probably meant the storm sewers or gutters alongside of the roadways because sanitary sewers were not installed in New Albany until the late 1980s.

During their year in office, the council also passed a law making it unlawful to have in one’s possession or explode “fire crackers, roman candles or torpedoes” at any celebration.

By December 29, 1922, the street lights had been replaced with electric lights, the roads had been “tarred and chipped” and the storm sewers “improved”. The women council members declared that they had accomplished their goals and therefore were no longer needed on council. Mayor Babbitt resigned as did most of the other members of council.

Shortly after resigning from office, Martha and Edward relocated to the family farm on Dublin-Granville Rd. At the farm, the house they occupied sat about 300 feet south of Dublin-Granville Rd. The front of the house faced west (towards New Albany) and was recognizable for its long driveway. There were also two adjacent cabins where various members of the Babbitt family lived from time to time. Today, the house and driveway still exist and are part of the Wexner estate. The official address is 7103 E. Dublin-Granville Road.

The New Albany-Plain Township Historical Society is frequently asked if Martha and Edward Babbitt lived on Babbitt Road. They did not and, to our knowledge, neither did their relatives. In those days, when “hard top” roads were built in an area, it was sometimes done by “petition”. It was the custom at the time to name the road after the first signer of the petition. Edward Babbitt was on the committee organized to have the hard top road constructed and was the first signer of the petition. Some of the residents on Babbitt Road purportedly thought the road should have been named after someone else, but evidently, the local tradition survived.

This article was provided courtesy of Nancy Ferguson and Dennis Keesee from the New Albany-Plain Township Historical Society.

RITA (Regional Income Tax Agency) recently mailed non-filing letters to New Albany taxpayers who neglected to file a municipal income tax return or exemption. If you received this letter, RITA does not have record of a municipal income tax filing or exemption from you for the tax year(s) listed in the letter, and RITA did not receive a response from you to the Non-Filing Income Tax Notice that was sent to you. Taxpayers can simply e-file returns to RITA at www.ritaohio.com, or by mailing or faxing the documents listed on the non-filing letter back to RITA. Those with questions can call RITA at 1-800-860-7482. ... See MoreSee Less